For expats, or maybe for all parents, or maybe just mothers, the lead up to the Holidays in New York can be an overwhelming list of events and errands.  There are two weeks of holiday parties at school, all involving contributions of time, shopping or baking. Or all three. Then there’s shopping. I don’t remember ever spending so much anxious energy on shopping before, but year by year, Christmas became a process of research, hunting and gathering.

Gifts are scattered in stores from SoHo to the Upper East Side, and unless you plan on giving everyone you know a $90 graphic-T from SoHo boutiques, or batik & bric-a-brac  from Lower East Side vintage stores, browsing for just the right thing to jump out at you  takes some fancy footwork. 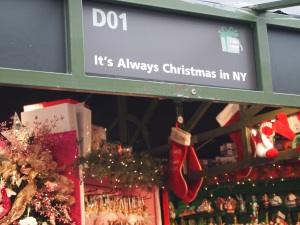 The week before Christmas during our first year in the city, I went on a home-sickness fueled search for mince-pies. I dragged two preschoolers from the Upper West Side to West Village’s Tea and Sympathy, a British store on Greenwich Ave. Greeted by a blast of wind-driven sleet at the 14th Street subway exit, I pulled them down the wrong Avenue, across a block and then the wind pushed us back up the correct one, to arrive at the tiny store and stand in a crowd of steaming parkas waiting for their fix from home. We were weather-beaten and wet. But we had our mince pies.

Before I learned the full extent of online shopping here, I zig-zagged frantically – several trips over two or three days – between Fairway, Wholefoods and a few of the specialty grocers like Zabars and Citerella. I dangled gingerbread men and candy canes in front of the children so they’d keep walking and at each shop I bought just a little more than I could realistically carry home.

I hung onto to DIY gift shopping for another year. While most expats refined their new-found efficiency by saving their wish-lists for Black Friday and Cyber Monday – the two major shopping days that launch the post-Thanksgiving sales, to start their holiday shopping,  I did it myself.

And missed the post. December 10 is the last day of guaranteed delivery for regular mail parcel post to Australia. 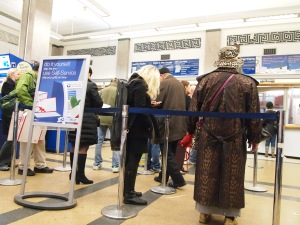 Into the vortex – in line at USPS

Last year we finally embraced online shopping for gifts. All department stores and toy shops run online stores, as do most clothing chains, some boutiques and all the major museum stores. Amazon Prime offers free, two to three day delivery on almost anything sold almost everywhere else.

After spending a holiday season as a sherpa, managing logistics from my couch was a substantial promotion. I practiced all year and I was ready for this Christmas days before December 10. For the first time in four years, I was on top of it!

Yet, I felt like I was doing more work. I work on-screen. I organize the children’s school and social schedules via email. I increasingly read on line. I even conduct most of my own social life and half my marriage via email. Things were getting done but they weren’t as much fun.

I missed browsing. I missed wasting money on those gifts for which I’d fail to find suitable recipients, which I bought because: “I might not be back this way”. I love walking through the alleys of the pop-up Christmas tree stalls, overhearing French-Canadian accents patiently explaining to New Yorkers the exponential dollar-per-foot formula of Fraser, Douglas and Balsam Firs. 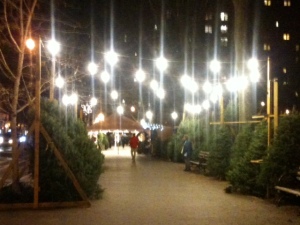 “… The Frasers will last longer. The Douglas will “drop their needles, but stink up good – great smell those Douglas”.

Just as Christmas threatened to become a giant to-do-list, I spotted a backdated NY Times Modern Love column. One throw-away line from Teresa Link’s essay said it all. On the list of domestic duties that swallowed her up…

“There was … the calendar of holidays we had to celebrate in ways that drained all pleasure.”

That sealed it. On Monday morning I walked 20 blocks down to the Urban Space-run Holiday Market in my neighbourhood, the Columbus Circle Holiday Market. Its 100 pop-up stores include great accessory designers, great food and a very laid back vibe if you’re there early. Also more hat/ glove/ scarf vendors than seems economically viable. 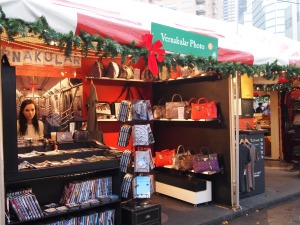 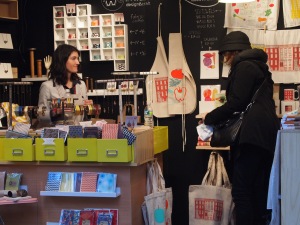 From there I took the subway down to 42nd Street and wandered through the more touristy Bryant Park Holiday Market, set around The Pond. I elbowed my way over four avenues to take an overcrowded 6 train back up the east side to the Metropolitan Museum of Art store. 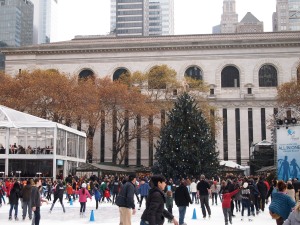 Walking back to the Upper West Side across Central Park, I had a great gift idea. I’d have to head back to Columbus Circle for it. Another day. It was late, I was tired, over-caffeinated and foot-sore The day’s errands could have been done in a morning on-line and left time for Christmas cards, which will now become new year cards. But I had jostled my way around Manhattan and back into ‘The Holidays”.

Cole Haan’s advertisement in the train, for all its smugness, had a point …

“You didn’t move to New York to stay home.” 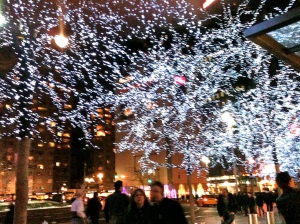 Well, up to a point. Now that all the pre-season rushing around is over, it’s up to us to celebrate it – gratefully, quietly, pleasurably – at home!